Ideas Abu Dhabi, a two-day festival bringing together some of the brightest minds from the UAE and around the world to tackle complex global challenges, returns for the third time on 27-28 March.

The 2019 Forum will focus on four specific tracks, each of which explores in depth some of the great challenges and opportunities of our time.

Referred to as “moonshots”, the 2019 tracks will examine the challenges to the current global order; the latest efforts to understand and even enhance the human brain; the impacts of the oncoming revolutions in transportation; and the dangers of a new cyber battleground.

Moonshot #1 – From New World Order to None? Evolution & Crisis in Global Relations
After the fall of the Soviet Union, US President George H. W. Bush declared a ‘new world order’. Decades on and the system of international institutions and global relations that has defined the post-World War II era is under pressure. A fast-growing Asia and re-assertive Russia are pushing for change and exploring alternatives. Will the existing system limp along until a crisis forces it to adapt, or can it evolve to reflect new realities? This track will explore these and related questions.

Moonshot #2 – The Brain: unfolding the mystery
The brain is the most complex structure in the known universe. Despite decades of research and millions of dollars spent on scientific research we still have a limited understanding of how it truly works. Significant efforts are underway to revolutionise the way we understand, treat, and even enhance the brain. This track will explore pressing questions related to the science of the brain including: ’how far away are we from any real progress in curing brain diseases?’ and ‘what potential is there for upgrading our own cerebral hardware?’

Moonshot #3 – Cyber: the new battleground?
The exponential growth of Internet connectivity – from phones and homes to businesses and governments – has created tremendous advances in knowledge, commerce, and education. At the same time, it poses new dangers to our personal and national security. High-profile cases have shown just how vulnerable our online lives have made us. Millions of people globally have seen their personal details go on sale on the dark web while hackers have locked out entire hospital systems seeking ransom payment in bitcoin.  The culprits are no longer visible, are scattered around the globe, and often have opaque motivations. This track will seek to shed light on these emerging threats and what can be done to counter them.

Moonshot #4 – Faster, further for all: the future of transport
From self-driving cars and Hyperloop to sub-orbital commercial space travel, the way in which we travel is set to be revolutionised. This track will seek to explore whether the future technologies that will underpin this revolution are achievable, what impact they could have, and the challenges they pose against a backdrop of urban congestion, climate change, and a growing population.

The Forum will be followed by an open-to-all public Festival packed with thought-provoking talks, interactive exhibits and workshops, and inspiring musical performances. 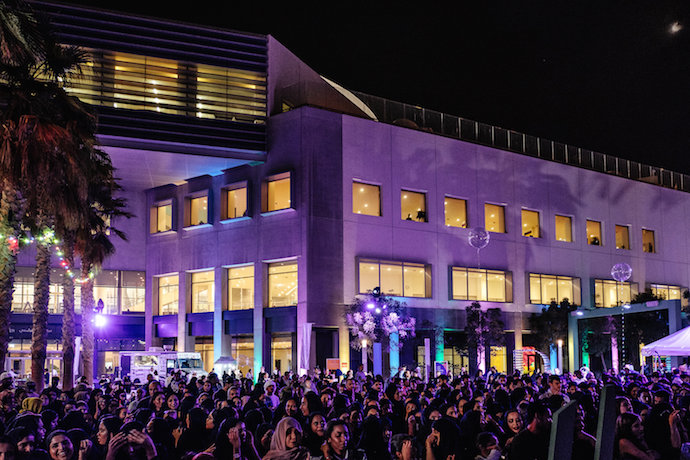 Ideas Abu Dhabi is held in association with the Aspen Institute, an educational and policy studies organization based in Washington, DC, and is hosted by Tamkeen, a company that delivers projects enriching Abu Dhabi’s social, cultural, and educational landscape.

Speaking ahead of Ideas Abu Dhabi, President and CEO of the Aspen Institute, Dan Porterfield, said: “Ideas Abu Dhabi has rapidly become a premier opportunity for some of the most engaging thinkers and doers from across the world to meet, connect, and elevate compelling ideas. Tamkeen have been wonderful partners to the Aspen Institute in this venture, and we are thrilled to be returning to the UAE’s capital – a vibrant international hub that is always looking ahead to the future – to continue engaging with the vital issues of our time.”

A Special Fellows Programme will also run during the event, reflecting the critical role of young people in shaping the future of the UAE.

The Special Fellows Programme creates a platform in which young people of the UAE are exposed to some of the world’s most groundbreaking thinking from world leaders and industry experts and allows them to challenge their ideas and assumptions. The UAE Government attaches great importance to listening to the voices and contributions of the Emirati youth, and the Special Fellows Programme at Ideas Abu Dhabi allows us to do just that.”

Never lose sight of your metrics with these online solutions